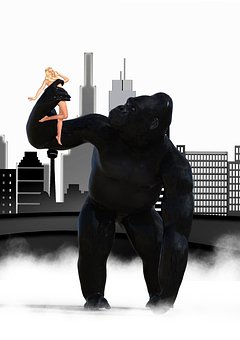 You​ don’t have a baculum. There, it’s been said, but don’t feel too bad. None of us do. Nor do Woolly or Spider Monkeys. This seems unfair when compared to gorillas and chimpanzees, who’d be lost without one. Put it this way, they have no need of an article about ED – affordable shockwave therapy.


Now you may be forgiven for asking – what is this thing, this baculum? To get straight to the point, it’s a penile or clitoral bone. Although the penises of gorillas and chimps are 1-inch and 3-inches respectively, they are always semi-erect, which is just as well in the circumstances.


We have cars and comfortable homes and smartphones, and our primate cousins trees and bananas, but they do have an advantage in that they don’t need to rely on hydraulics to get an erection. As we all know, once you get moving parts, things can go wrong.


To maintain an erection, the penis must become engorged with blood, and then that blood be retained in the shaft for the duration of the sexual act. Put simply, you are suffering from Erectile Dysfunction if you have a consistent inability to sustain an erection for sexual intercourse.

Now, this happens to all men from time to time, but it’s the word ‘consistent’ which is key here. It’s not about a Saturday night after 10 pints of Farmer Giles’ Doomjuice, or whatever, but a life-changing, debilitating condition which can have severe consequences for the sufferer way beyond the obvious, not least psychologically.

ED – you are not alone

The stats are quite astounding – we’re looking at around 40% of men over 40, 50% over 50, and… you know the rest, who suffer from erectile dysfunction. A real worry for centenarians, I suppose. The apparent flippancy is intentional, though. Let’s all normalise the conversation around erectile dysfunction, bring it into the open, so that men do not suffer in silence.


Having dealt with hundreds of sufferers (the only appropriate word), we have been privy to their thoughts on the matter as they’ve opened up to someone who is possibly the first person they’ve ever spoken to on the subject. In other words, a stranger on the phone, rather than a best mate of maybe 30 years standing.


If they’d had a dodgy knee, tennis elbow, or just about anything, they would quite happily chat about it. You’d soon wish you’d never asked ‘how are you’? The penis, though, and its surrounding bits and bobs, remains like its euphemism, our ‘private parts’.


It’s far, far better though, to get it all out in the open (cue sniggers) and go for the full frontal approach. The first step is to acknowledge the problem and then decide what to do about it, after exploring the available options.

Pills, pumps, rods and jabs all have their place in alleviating ED. Indeed, in the 20 years of Viagra’s history, Pfizer, the manufacturer, has raked in US$17-billion in profits, such has been the demand.

Although this ‘wonder drug’ has had its upside for many men, and indeed changed lives and arguably society, there is also a ‘what goes up must come down’ aspect. PDE5-inhibitors (Viagra etc,) have been shown to work, much as many modern drugs, by addressing a specific condition.

You have high cholesterol – ‘take statins’; high blood pressure – ‘take beta blockers’ being examples. A pill for every occasion, except that blood pressure tablets, for example, do not cure the condition. They put it on hold, a bit like driving a car with a puncture. You’re moving, but doing untold damage to the wheel.

Because the arteries of the penis are among the smallest in the body, there’s ‘a canary in the coal mine’ aspect. Erectile dysfunction is often an advance warning of cardiovascular issues further down the line; nothing in the body works in isolation. A chemist can now offer virtually free blue tabs without a preliminary doctor’s health assessment and, serious underlying conditions or not, one day they stop working.


Pumps can work, and at least you are not resorting to medications, but if Viagra robs the act of spontaneity, a pump manages this on a spectacular, highly visible scale. As for injections, they do dilate the arteries of the penis, but there are some places where instinctively you really do not want a needle to go.

Shockwave therapy (SWT) sounds about as appealing as a needle, as in a “No, Mr Bond, I expect you to talk” sort of way. The only thing shocking about it, though, is the price (more later). You will feel pins and needles, rather than a hair-on-end shock. The shock in shockwave is arguably an unfortunate label. It’s soundwave based. The British shockwave association (BSWA) slogan is ‘Shockwave Therapy: the sound that makes us whole again’. – http://www.britishshockwaveassociation.com/

SWT differs from other erectile dysfunction treatments in that it is intended as a long-term approach. You see a urologist and your overall health is taken into account before treatment can begin. Once you are signed off, you can start the course, administered by a highly-experienced practitioner who has treated hundreds of erectile dysfunction patients. See here


The treatment is non-invasive and without unwanted side-effects. Our Lead Practitioner applies the device directly to your penis and groin area for about 20 minutes. The soundwaves then weave their magic by dilating blood vessels and stimulating nerve growth.

We usually ask that before you come to see us,you  pop a Viagra or Cialis. If you get a positive effect from these, this is a sign that ESWT is likely to be effective for you. If, on the other hand, a patient is a non-responder to PDE5-inhibitors, shockwave therapy gets them to the point where they become responders. Then, with further treatment, they too no longer require medication or other temporary measures.

The number of treatments required varies according to your individual needs. If you are in your forties you may need less sessions than in your seventies, although we aim for x 6 weekly sessions as a benchmark. Twice-weekly is also an effective protocol if your schedule permits. At most clinics, 6 sessions cost around £3,000, whereas we offer the equivalent treatment at a more affordable £1,800. Our location in Chiswick, West London, enables us to charge reduced rates. We use the very latest technology, and this, the Dornier Aries, is backed by impressive clinical trials results.

Our Lead Practitioner then takes into account your lifestyle, including diet, exercise and stress levels. After all, it is often lifestyle factors which lead to erectile dysfunction in the first place. Addressing the culprits goes a long way to supplementing the treatment.

A couple of years ago we attended a shockwave conference at The Royal College of Surgeons. There were speakers from around the globe who were experts in shockwave therapy. They had successfully used SWT to treat musculoskeletal injuries for many years, yet remained sceptical about its effectiveness for ED. One year later, we attended a similar London conference, and the attitude was totally different.

What had changed? In the interim, they had seen the clinical trials and learnt more about the positive evidence. Now, more and more independent online articles are appearing which support the science.

Back to the Baculum

Being an ED clinic, by necessity we need to know our subject. A few myths then get blown out of the water (incidentally, WW2 depth charges are what began investigations into the effects of SWT). One of these is the size of an erect human penis. Is it related to height, foot, hand or even nose size? So far, no studies can find a link.


This could be behind King Kong’s anger-management issues. He has had a lot to be miserable about. Then suppose, just suppose, he’s like any other gorilla with a baculum…. one-inch?

This site uses Akismet to reduce spam. Learn how your comment data is processed.

Where to find us